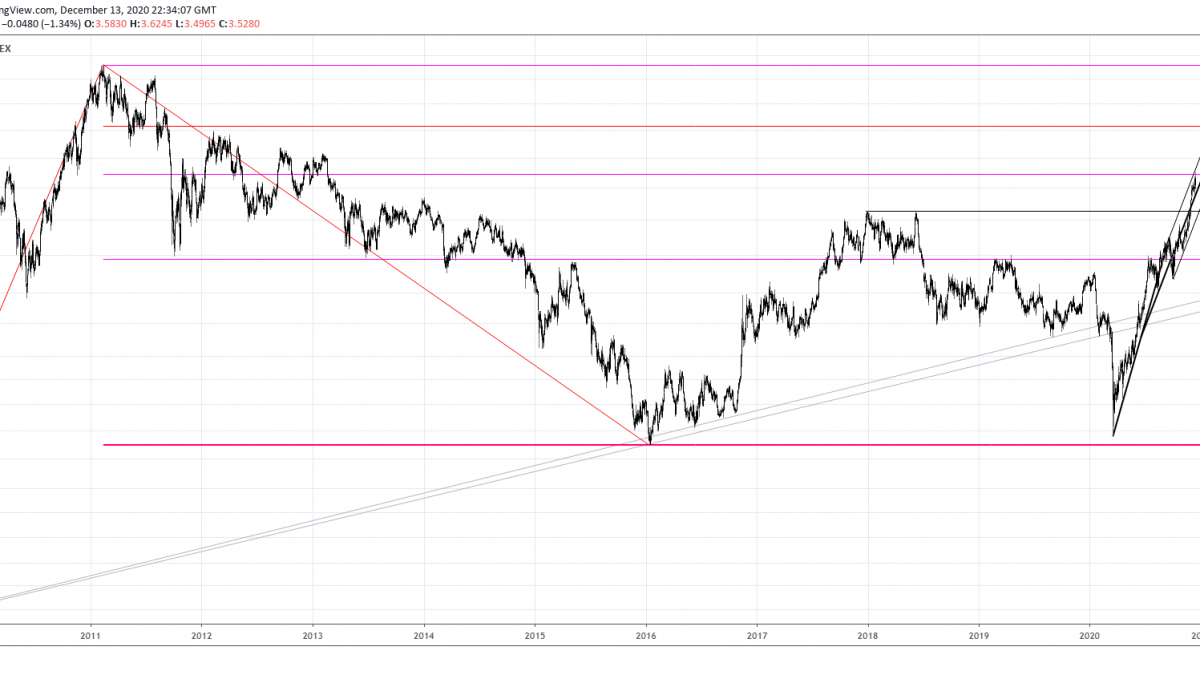 Copper reached the noted 61.8% retrace at 3.6130 on Friday and reversed lower.  The level is also reinforced by the upper parallel of the channel from the March low.  Let’s see how action develops following Friday’s reversal but this is a great spot for a more important pivot.  I’m also wondering if copper is ‘the canary in the coal mine’ regarding other assets (USD, stocks, BTCUSD, etc.).

12/1 – Copper is trading at its best level since March 2013 and has rallied 7 of the last 8 months.  Be aware of the 61.8% retrace of the decline from the 2011 high at 3.6130 for possible resistance.  Considering that ‘everything’ is going up against the USD, this level could prove important from a multi-asset perspective.

TLT made in inside week last week at longer term support.  The upper parallel of the channel from the 2007 low was resistance for years and turned support this year.  This line is clearly critical and I favor upside as long as price is above the line.  Near term focus is possible triangle resistance near 165.50.

Euro futures made a 2 week volume reversal last week at a 2 year high.  There have been 2 other bearish signals since inception of the euro…February 2004 and February 2018.  Both occurred near price tops (in both instances, there were re-tests of the high).  There has been 1 bullish signal, which failed in 2014.  Add this weekly signal to the LONG list of technical information that suggests EURUSD is headed lower.

12/9 – If a top is in place for EURUSD, then 1.2132 should provide resistance.  This is the week open and a short term slope confluence.  Possible bounce levels are 1.2011 and 1.1965 but remember that a rare daily volume reversal triggered on Friday.  Those charts, from Sunday’s update, are reproduced below.

The drop in GBPUSD consists of 2 equal legs and channels perfectly.  As such, it’s possible that Friday’s low is important.  Possible support is 1.3230/40.

12/7 – GBPUSD is following through on Friday’s reversal.  As noted yesterday, this bounce presents a short opportunity.  Ideal resistance is about 1.3440 (12/1 and 12/2 highs and underside of the median line).  Initial downside focus is the line off of the September and November lows near 1.3030.

Absolutely no change to USDTRY.  I remain of the mind that weakness since 11/24 is a B wave and proposed support remains 7.7145.  Eventually, there should be the best chance to short since the November top…maybe near the 61.8% retrace of the drop at 8.1706.