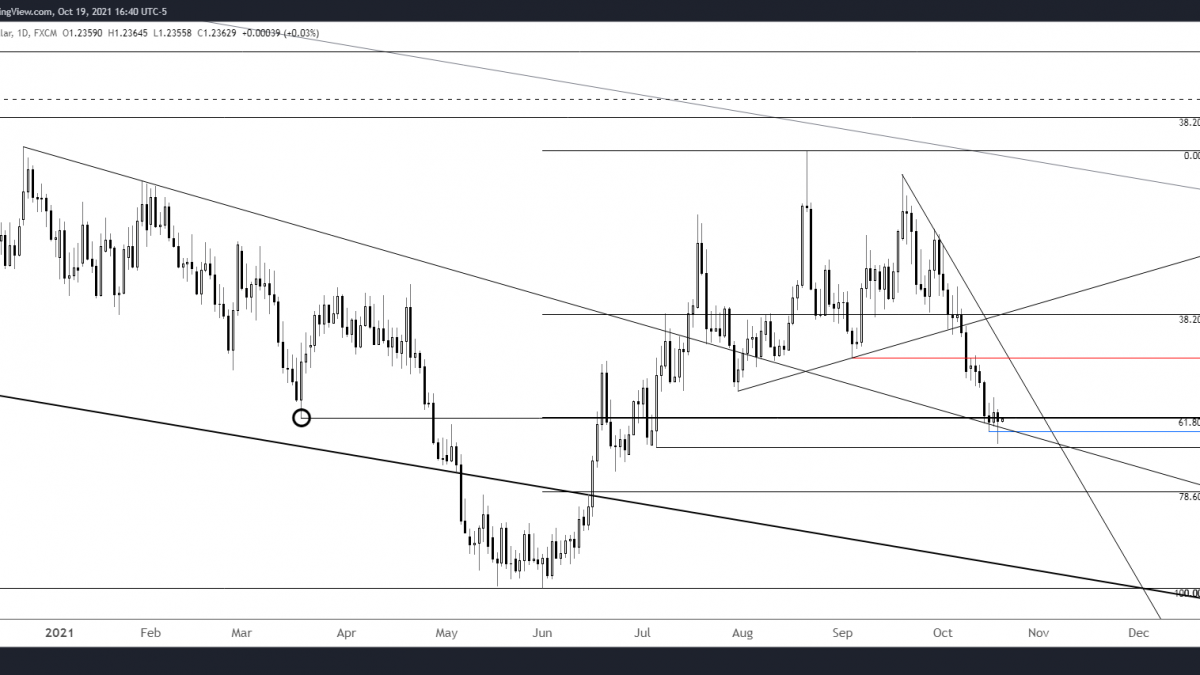 Copper has carved 2 bearish wicks the last 2 days, raising the specter of a pullback following the breakout on 10/13.  Former resistance is proposed support beginning at 4.4715.  The bottom of the support zone is the top side of former trendline resistance near 4.3755.

Commodity FX has been on an tear.  AUDUSD tagged the September high today so we could get a pullback.  If we do then watch for support near .7425, which is the center line of the channel from the February high (this line was resistance in June).  More important resistance isn’t until .7530/60.  This level is loaded with the February and April lows, 2 legs up from the August low, the 200 day average, channel resistance, and VWAP resistance (see futures chart below).

GBPUSD has traded into the line that extends off of the June and September highs.  The level is defended by the 200 day average (just above) and VWAP resistance (see futures chart below) so I’m ‘thinking’ pullback.  In the event of a pullback, keep 1.3670s in mind for support.

NZDUSD has broken out.  Similar to AUDUSD, price tagged the September high today so we could see a pause in the relentless move higher.  If that happens, then watch for support near .7070-.7100.  The next important level proposed resistance and a possible short is .7225/40s.  This is 2 equal legs from the August low and channel resistance.

USDCAD has spent 4 days trading around the 61.8% retrace of the rally from the June low.  Also, today’s long lower wick and 4 hour volume reversal (see below) suggest that a relief bounce could take hold.  With resistance probably not until 1.2490s, I’m willing to trade the long side against today’s low.

10/14 – USDCAD is getting destroyed but price closed today at a possible bounce level defined by the 61.8% retrace of the rally from June.  The level is reinforced by the March low.  There is obviously no evidence that price is going to bounce from this level but if it does then former support at 1.2493 is in line for resistance now.  This would be near the equivalent of 2021 VWAP on CAD futures (see below), which has been a pivot all year for CAD.