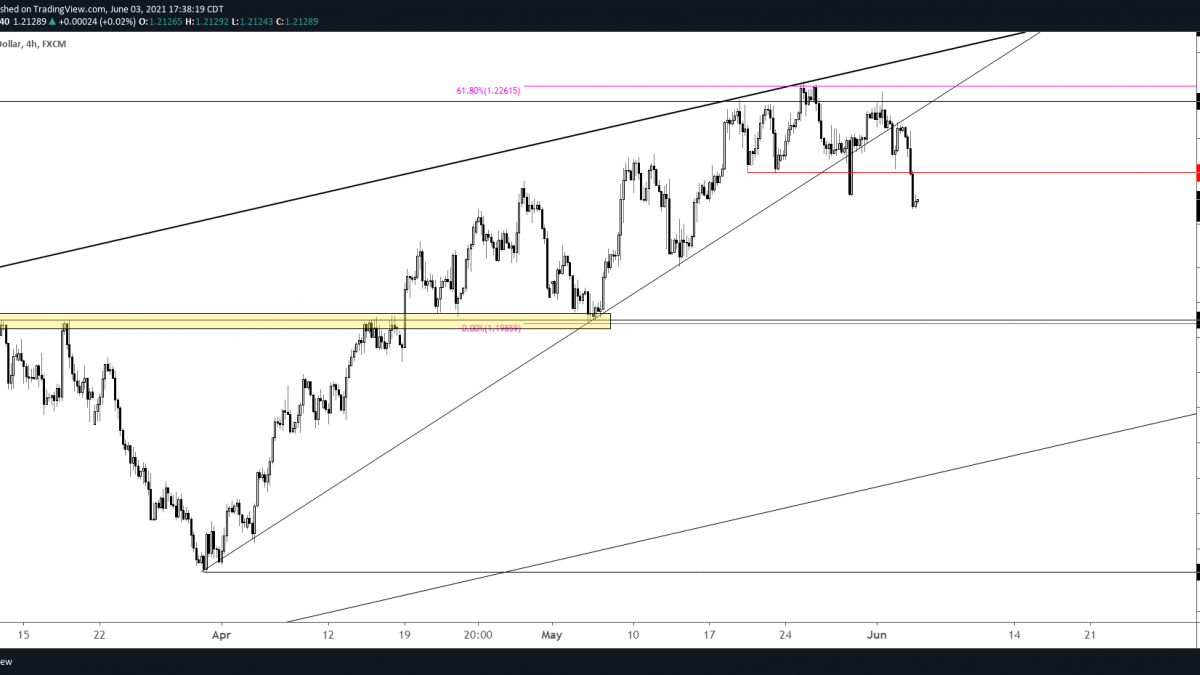 BTCUSD (bitcoin) is correlated with risk sentiment!?  No kidding.  We’ve been posting charts and talking about this for months.  Continue to watch BTCUSD of course but always analyze each market based on its own technical merit because correlations do change.  I’m wondering if that change is underway now that this is noticed.

Copper is testing 14+ month trendline support.  A break below the line would indicate a significant behavior change for copper…but maybe also for the ‘inflation trade’.  This has ramifications for the USD generally.  The long term chart is below.

5/24 – After trading to an all time high 2 weeks ago, copper put in a weekly reversal candle.  Price followed through on the downside last week as well.  This raises the specter of a massive failure after the move above the 2011 high.  A close up view is below.

EURUSD has broken down and near term focus is 1.1990 (see highlighted zone).  Resistance should be 1.2160.  Eventual downside is the lower parallel of the channel that originates at the March 202o low.  That line is about 1.1850.

6/1 – EURUSD is also testing its trendline from the April low.  A drop below and re-test of the underside of the line would be ideal for entering the short side.  1.2180 is a possible short term bounce level.

AUDUSD confirmed the head and shoulders top with today’s drop (no flat underway as I suspected).  The neckline at .7690 should be resistance now.  Downside focus is .7415, which is huge.  The level is defined by the September high, 23.6% retrace of the rally from March 2020 and 2 equal legs down from the February high.

6/2 – The possible head and shoulders top in AUDUSD since late April is clear for all to see but one more push above .7814 isn’t out of the question in order to complete a flat pattern from the 5/13 low.  If that happens, then pay attention to the underside of the red trendline for resistance.

NZDUSD broke the trendline that originates at the March low today.  The underside of that line is now proposed support at .7180.  Downside focus is .6800…give or take a figure.