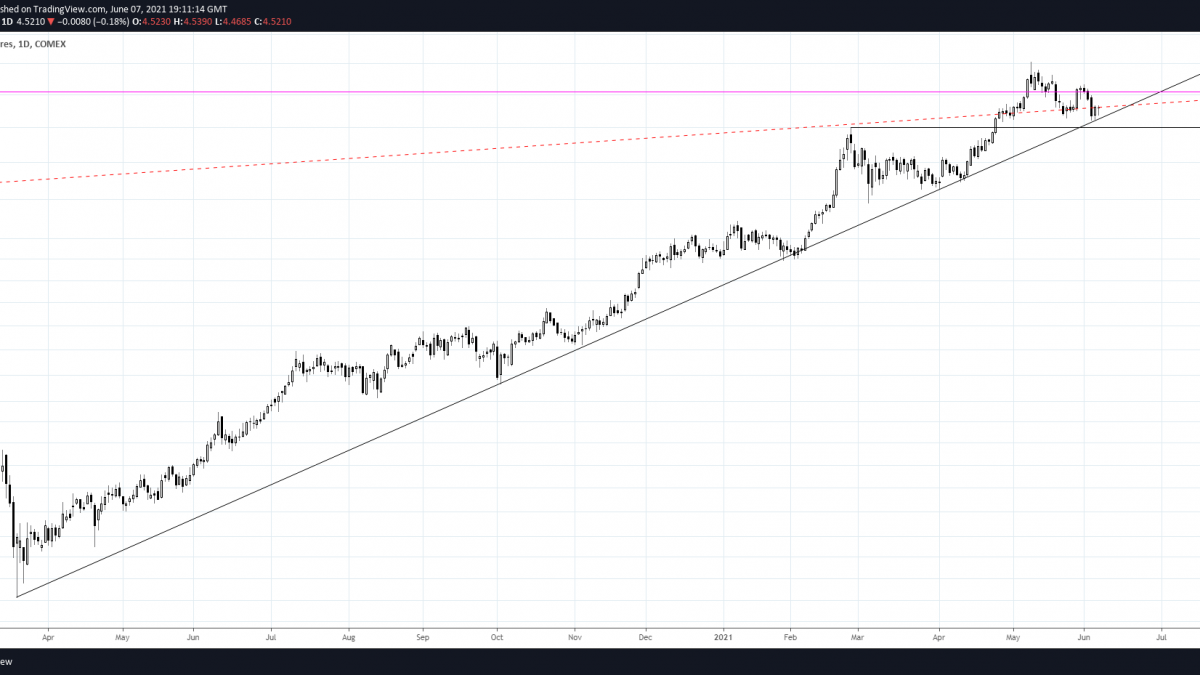 The Morgan Stanley Market Timing Indicator has reached the most bearish reading on record.

Copper is at 14+ month trendline support.  A break below would indicate a significant behavior change and usher in the largest decline since the rally started in March 2020.  The long term picture is below.

5/24 – After trading to an all time high 2 weeks ago, copper put in a weekly reversal candle.  Price followed through on the downside last week as well.  This raises the specter of a massive failure after the move above the 2011 high.  A close up view is below.

USDOLLAR traded into the upside level of interest and turned sharply lower.  Most of the rally from the May low has been retraced.  Even so, nothing regarding the idea of a massive consolidation bottom since January has changed.  11655 remains proposed support.  COT positioning is stretched to the downside and indicates elevated reversal risk (see below).

6/2 – Like Friday, USDOLLAR tried breaking out today.  Also like Friday, price was slammed lower as U.S. trading got under way.  Still, price has broken above the trendline from the April high so maybe the buck finally ‘surprises’ to the upside.  If it does, then the next level of upside interest is 11770.

USDCNH made a weekly J-Spike last week.  This is the 2nd signal since 2013 when price is at a 3 year extreme (high/low).  The only other signal was the bearish one in September 2019…which nailed the top.  Near term, watch for 6.3740s support (see below).

EURJPY has turned down just ahead of the noted 134.30.  The lower wedge line is about 132.00 but 133.60 should provide resistance if a top is in place.  This level is defined by the 200 hour average and a well-defined horizontal pivot (see below).