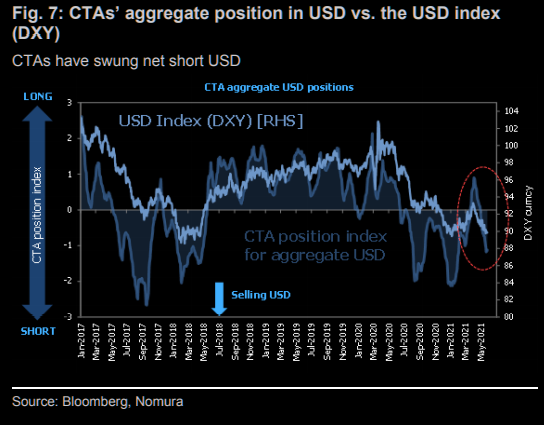 Not surprisingly, CTAs are chasing USD shorts again.  Of course, this tends to happen just before a turn (then they chase the USD higher).

After pulling back from the early April high, TLT found support at the 61.8% retrace of the rally.  Price is again at the median line from the channel that originates at the March 2020 high.  Markets tend to exhibit heightened volatility around median lines.  I’m on the lookout for a surge higher.  I’ll address implications for FX and equities if we get a strong TLT (bond) move.

4/5 – TLT has reached initial resistance from the median line and 50 day average.  I remain constructive towards 148.90 but some back and fill and/or a pullback here wouldn’t be a surprise.  If price breaks above the median line, then the top side of that line becomes proposed support.

The GBPUSD rally from April channels perfectly.  With 3 tops at the upper parallel, I’m wondering if a decent swing high is in place.  A drop below 1.4100 (center line) would suggest additional downside towards the lower parallel (1.3950-1.4000).  The setup would be to short the underside of the center line.

NZDUSD remains confined to the channel that originates at the late March low.  High today was near the center line and line that extends off of the May highs.  This is a decent spot for the cross to turn lower but a break under the channel near .7150 is needed in order to trade from the short side.  Heads up…RBNZ is today.