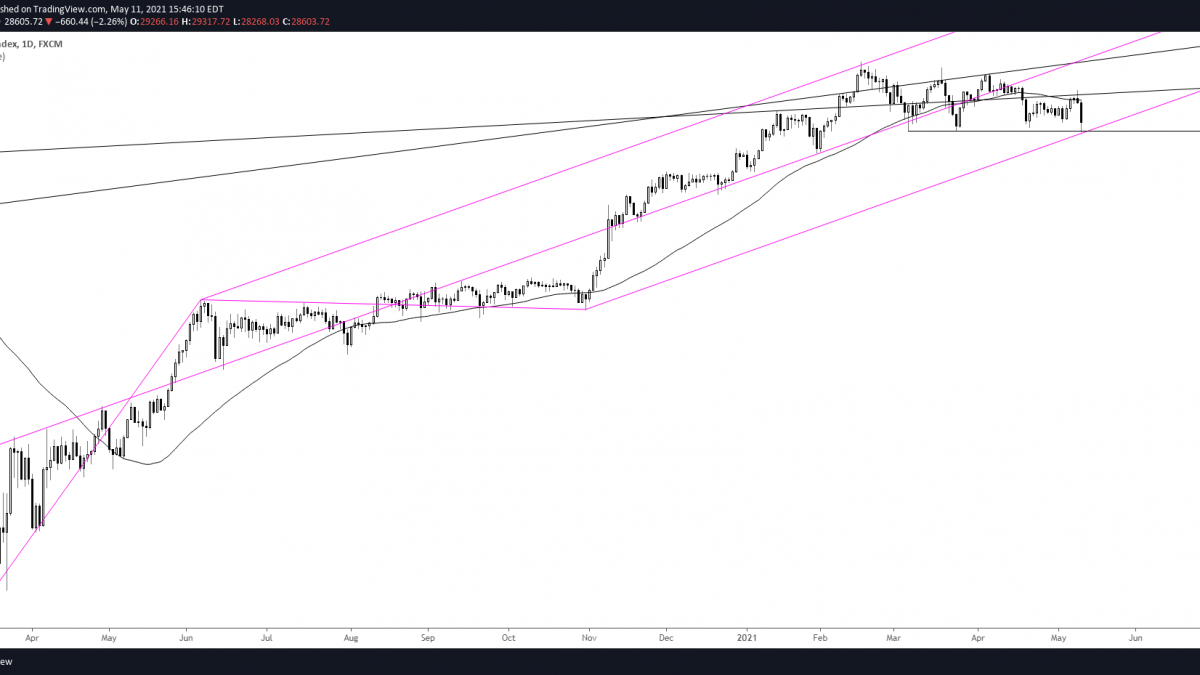 The Nikkei reached the lower parallel of the Schiff fork mentioned 3 weeks ago.  The level is also support from March (3/5 and 3/24 lows).  Huge level!  A break below would complete a topping process that has been underway since 2/16 (descending triangle).  Note that this possible topping pattern has taken place at the upper parallel of the channel from the 2009 low (see monthly chart below).

4/22 – The Nikkei topped in February at a confluence of trendlines.  Since then, price has traded in a volatile range and is currently near the lower end of that range.  Near term downside focus is about 27720.  The level is a well-defined horizontal level and the lower parallel from a Schiff fork that originates at the March 2020 low (see below).

The last spot to keep an eye on for USDOLLAR before the February low is 11636.  This is daily reversal support (2/25 close) and the top side of the trendline that originates at the April 2020 high.  The line was formerly resistance so watch it for support.

USDJPY is testing channel support again!  It’s tempting to buy into this support line but the failed break above the 2018-2020 line in early April lends a bearish backdrop to the cross (see weekly chart below).  If price breaks below the current level, then I’ll turn bearish.  Also, it’s interesting that the Nikkei and USDJPY are both testing key levels simultaneously.

5/6 – USDJPY remains confined to the channel from the January low.  Focus is on the lower parallel near 108.40.  A break below there would suggest a deeper drop is under way from the March high.  Until then, play the range.

5/10 – AUDUSD reversed sharply lower today after trading just above daily reversal resistance (2/25 close at .7872).  A view of intraday action reveals that the decline is unfolding in impulsive fashion, which favors the idea that at least a temporary top is in place.  I’ll monitor near term action closely for a short entry over the next few days.