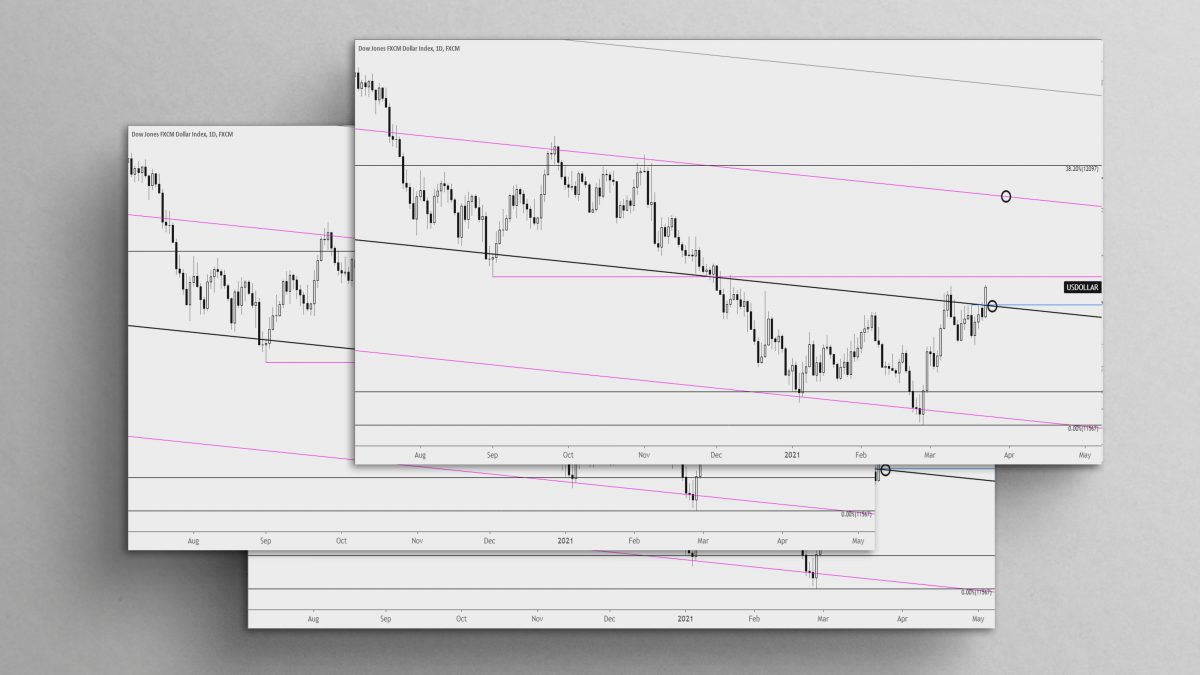 Bang.  The noted level held as resistance for the 30 year yield we’re seeing the first decent drop in yield since January.  Not coincidentally, the inflation trade is starting to fall apart (USD rally, crude and silver declines, emerging markets breaking down, Yen crosses dropping, etc).  I expect this to resume until further notice.

2/24 – The 30 year U.S. yield is one of the purest representations of the ‘inflation trade’.  The yield bottomed in March (along with everything else) right at the full extension from the channel that originates at the 1987 high.  I’ve misjudged the speed and strength of the rally but 2.44 looms as the biggest test since the low.  This is the center line of the noted channel and the November 2019 high.  A move back to the lower parallel, which has been significant, wouldn’t surprise.  That is about 1.69.  A zoomed in chart is below.

Crude is following the script (bounce then lower) and focus remains on 53.93-54.86.  That is possible support for a bounce.  Let’s see what happens there before making additional comments.

3/18 – Crude plunged beneath the trendline that connects lows since mid-November today (finally…filling up the tank is getting expensive!).  The underside of this line is now resistance near 61.  Downside focus is January resistance and the 38.2% retrace of the rally from the November low at 53.93-54.86.

Silver traded 26.6370 before turning over and price is already near the March low at 24.0180.  That’s a possible bounce level but I’m looking towards September and November lows at 21.66/90 (eventually) over the next month or so.  Proposed resistance is 25.41.

The break above the median line in USDOLLAR is significant!  The top side of this line should provide support now near 11810.  The September low at 11867 is possible resistance for a pullback/pause but general focus is on the parallel that was resistance in Q4 2020 (then reassess).  That line is about 12030.  The long term view is shown below for context.

3/9 – Lo and behold, USDOLLAR reversed lower just as mainstream financial publications ‘noticed’ the rally.  The median line that price reversed off of is critical.  Notice how the line was support in September and resistance in December.  Also, notice how parallels within the structure have nailed the big turns.  Until/unless price takes out the median line, I’m cautious on USD upside.  If the USD is going to break above the median line over the next week or so then I’d expect support near 11728/44 (see 4 hour chart below).  This chart also highlights the manner in which I think about markets/trading.  That is, identify decision points and make decisions with capital at those points!  This is in contrast to blindly adhering to a specific narrative/direction.

EURUSD is at the 200 day average for the first time since May.  Given the importance of the USDOLLAR median line break, my view is that EURUSD breaks below the important average.  Downside focus is the confluence of the lower parallel from the bearish fork and the lower parallel from the channel off of the March 2020 low at 1.1640.  1.1880 is proposed resistance (see below).

NZDUSD has reached the noted swing objective at .7000.  This level is nothing more than a bounce level (for now at least).  The more important level for possible support is about .6825.  Former support at .7100 is now important for resistance.

3/18 – The underside of the channel from the late December low provided resistance yet again in NZDUSD.  VWAP from the high and 2021 VWAP also held as resistance (see futures chart below).  A swing objective is the full extension of the broken channel, which is near .7000.  .7200/30 should provide resistance for short entry.

1.2670 is a spot to know in USDCAD (circled).  Notice how price immediately retraced today’s drop on BoC news.  That kind of reaction suggests that USDCAD is bullish.  It’s not the news that matters, it’s the reaction to the news that matters.  Last week’s high at 1.2548 is proposed support.