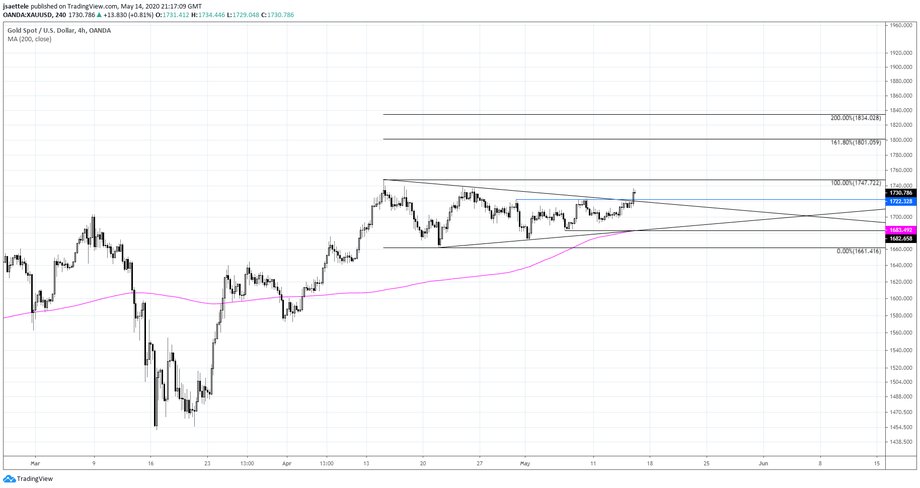 The chart of spot gold is cleaner show I’m showing it instead of futures.  Price broke out of the triangle described yesterday.  That’s bullish!  The top side of the former triangle line should be support now near 1720/22 (former highs at 1722).

5/13 – I like to say ‘resistance is resistance until it’s broken’.  Gold has been consolidating in a triangle since the April high and is testing the triangle resistance.  Triangles tend to resolve in the direction of the previous trend…in this case higher (triangles can occur at highs as consolidation tops…the key is to wait for the break).  At the current juncture, I lean bullish.  The triangle objective is 1911, which is just under the all-time high of 1923.70.  Spot gold (see below) is just under its triangle resistance line and the equivalent objective is 1834.

GBPUSD has reached the top of the noted support zone of 1.2130/64 and a 3 wave corrective decline may be complete or nearly so from the April high.  Recall that this is also the former 4th wave low, 38.2% retrace of the rally from the March low, and 25 line of the fork from the September low.  I’m contructive GBPUSD now.

USDCAD failed at short term trendline resistance today.  A high volume hour also printed at 1.4100.  Watch that for resitance now.  As long as price is under today’s high, near term focus is towards 1.3950 support, which is trendline support (blue line) and the month open.

USDJPY held up today so I’m looking higher as long as price is above Thursday’s low at 106.74.  There is a high volume level at 107.03 that is proposed support for entry.  Also, action since the 4/29 low is a possible head and shoulders.  I like that combination…a head and shoulders following a wedge break.