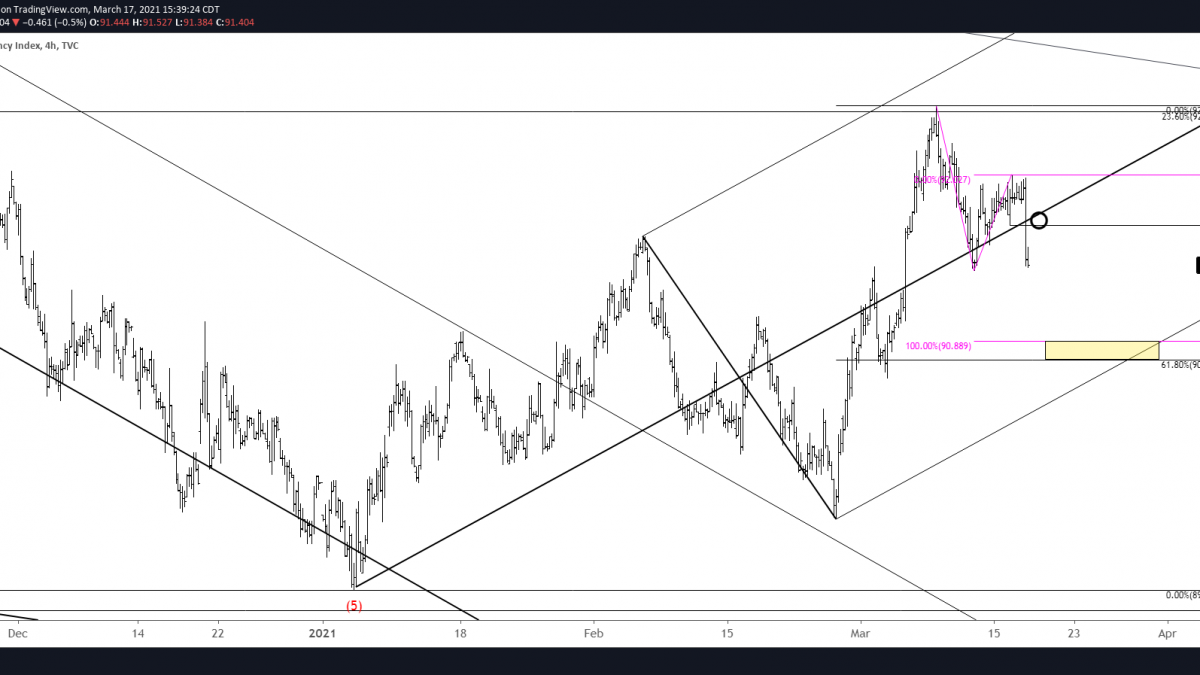 Silver traded into mid-26.00s on 3/11 before pulling back but price is pressing the top of the March range and potential resistance looms slightly higher.  26.70 is a spot but my focus for a pivot is 27, which is 2 equal legs up from the 3/5 low and the 61.8% retrace of the decline from the February high.

3/7 – Silver is bouncing after sliding to its lowest level since late January.  The trend lower is intact and focus for resistance is 26.48 or so.  The next downside level of interest is the January low at 24.02.

With respect to general USD swings and turns, USDCHF has been informative.  As such, don’t forget about the potential importance of .9180s for support.  A hold at that level may indicate a return to the USD rally that started in January.

3/16 – USDCHF remains under pressure and the near term bearish objective has been altered slightly to .9185.  The 38.2% retrace of the rally from the February low is .9183 and 2 equal legs down from the high is .9180.  This level intersects the lower parallel from the short term channel during the U.S. session tomorrow.  Maybe we get a USD dump on FOMC and reversal towards USD strength after the event?  .9280s is proposed resistance now.

DXY focus is lower in a C wave towards 90.76/89.  This zone is defined by the 61.8% retrace of the rally from the February low and where the decline from the March high would consist of 2 equal legs.  2021 VWAP and VWAP from the January low reinforce the level as potential support (see futures chart below).

Today’s action clarifies the near term picture.  As with other USD majors, my thinking is that the rally from the March low is corrective.  The rally would consist of 2 equal legs at 1.2037 and the 61.8% retrace of the decline from the February high is 1.2088.  The zone is wide but is the best that price action allows for at the moment.  Watch for support near 1.1950.

3/16 – EURUSD has dropped into proposed B wave support.  FX has been quiet to start the week as participants wait for central bank meetings.  FOMC is first on the list tomorrow.  Above 1.1950 would suggest that the interpretation shown on the chart is correct.  Until then, there is nothing do but hurry and wait.

USDTRY traded into the bottom of the noted zone for resistance today and turned sharply lower.  The action reinforces the idea that a B wave lower is underway towards 7.23/29.  Proposed resistance for the rest of the week is 7.56 (week open).