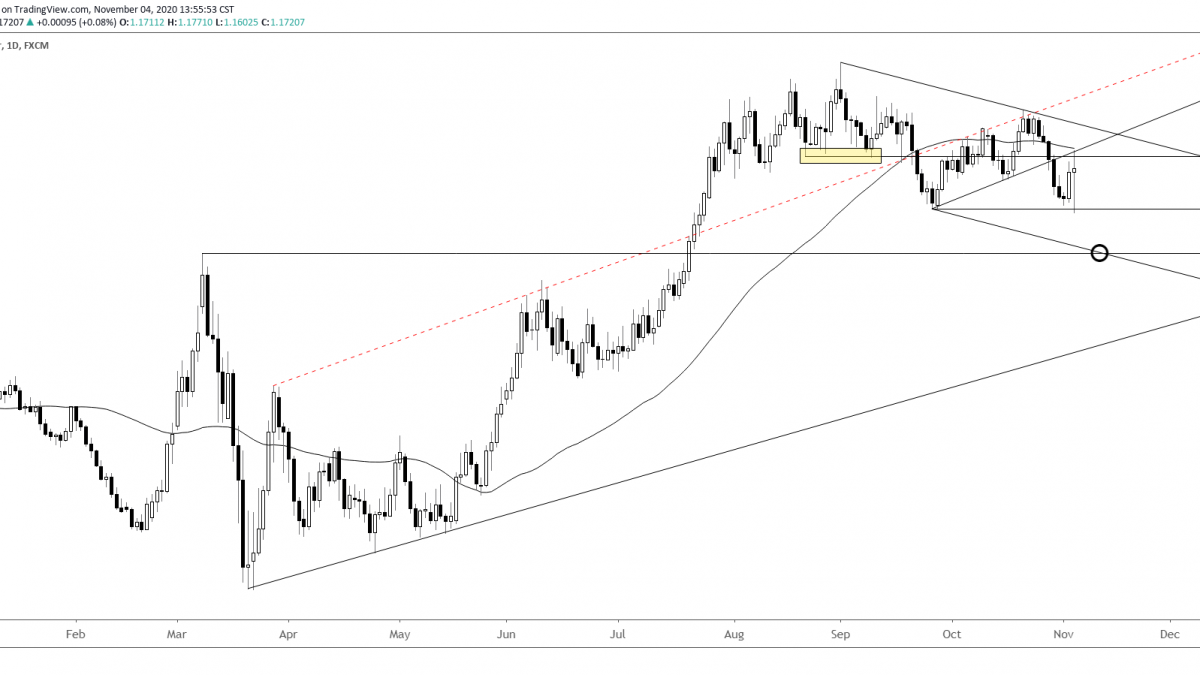 So much for getting clarification on trends following the election, which apparently isn’t over.  Price continues to sit just under resistance from a trendline, the 2011 high, and the 50 day average (not shown).  A break above would be bullish but resistance is resistance until broken so focus is lower until it’s not…that simple.

Silver is in a similar position to gold.  Price is just under trendline resistance.  Focus is lower unless price breaks above trendline resistance…that simple.  If weakness occurs from the current level, then former resistance in the 18.90-19.75 zone would be in focus.

Still no clarification for DXY and nothing has really changed.  Low on ‘election night’ (which is apparently election week or even month now) was 93.09…right on the top side of the line off of the 9/25 and 10/15 highs.  The next possible support is the trendline from the March high near 92.75.  Again, DXY has traded sideways just above long term support since late July (see below).

11/3 – The pullback in DXY is nearing proposed support from the top side of former resistance lines near 93.00.  This needs to hold to maintain a constructive view.  The drop today may be ‘it’ though since VWAPs from the September and October lows held today (see futures chart below).

EURUSD traded into resistance as early polls closed, tanked to its lowest since 7/24 and then ended the day unchanged.  So 2020.  Bottom line, resistance was hit so I favor the short side.  Weakness below 1.1700 (most recent high volume level and support in August and October) would warrant taking a shot.

11/3 – The EURUSD bounce has reached 1.0740, just under the proposed 1.1750/75 zone for resistance.  So, maybe we get upside attempts tonight as election results roll in.  Ultimately, focus remains lower towards 1.1495 (or so) as has been the case for several months!

Well, USDCNH did rip higher and took out the 10/28 high but the rally failed (most similar action to 2016 here in terms of a reversal) and price is quickly approaching a HUGE level.  The level in question is the 61.8% retrace of the rally from the 2018 low, the line off of lows since 6/10, and the July 2018 low.  USDCNH has been trending lower since May.  A reversal from a major level following an ‘obvious’ breakdown would make sense.

As is the case with a number of USD pairs, NZDUSD ended the day unchanged.  Price took out the 10/9 high but AUDUSD did not.  This is a minor non-confirmation but one nonetheless.  Also, price reversed near the year open price at .6724…again (it did in late October).  The bars on the chart show 4 hour volume reversals with a specified volume threshold.  The signals have been amazing.  Below .6644 (high volume level) would warrant a short position.

10/29 – No change to NZDUSD either.  In fact, I’m more confident in downside against this week’s high given the 5 wave drop from the high.  A 61.8% retrace of that drop would be .6675, which is exactly where resistance was proposed anyway.