Wait…a liquidity crisis in the dollar? 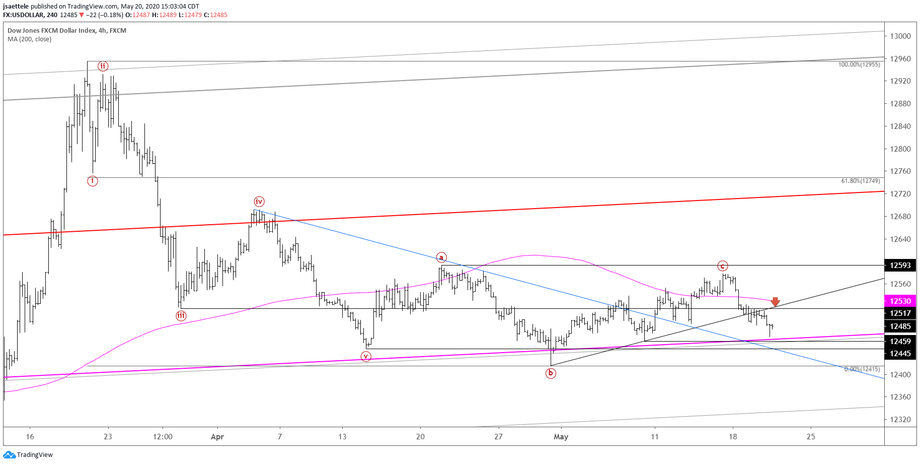 It ‘feels’ like the USD is on the verge of breaking down.  That said, USDOLLAR is back into important support (line off of 2011 and 2014 lows and a major horizontal level…see weekly chart below).  Support is support until broken so respect bounce potential with resistance near 12520.

5/18 – Given today’s decline, it’s possible that wave C of a flat ended last week in a truncated fashion.  A truncation occurs when wave 5 or C fails to take out the price extreme of wave 3 or A.  Pay attention to the short term lower trendline near 12500.  That level is still possible support so a break would support the idea of that wave C completed as a truncation.

There are 2 big upside levels to pay attention to in AUDUSD; .6660/80 and .6823.  The first zone is the 200 day average and a major horizontal level.  The higher level is a gap from January.  Buying at this exact moment isn’t the best tactic though.  I prefer to buy support in uptrends.  Sure, I’ll miss moves but it’s bad practice to let FOMO dictate entries.  IF AUDUSD pulls back from here, then pay attention to .6520s (VWAP levels…see below) for support to buy.

5/19 – AUDUSD took out the April high and reversed today.  The rallies in both AUDUSD and NZDUSD from last week’s lows are impulsive so those lows may be ‘higher lows’ within a larger bullish cycle.  However, we have another non-confirmation today with AUDUSD making a new high and NZDUSD failing to do so.  We’re left with conflicting evidence.  In any case,  today’s failure just above the April high and at a short term channel presents a short term range trade.  I am looking towards .6470s in the near term.

A 3rd or C wave higher is underway in NZDUSD so upside potential is significant.  Similar to AUDUSD, I ‘want’ to buy weakness.  The best to do so looks like .6070 or so.  This level is supported by former resistance, parallel consideration (25 line of a new channel and top side of former trendline resistance), and VWAP (see below).  Seasonal tendencies are now bullish.

Is EURUSD about to resolve the 2+ month consolidation to the upside?  I wanted to buy 1.0860s yesterday but we might not get that chance.  The near term bullish channel suggests support near 1.0910 (notice how the parallel crosses highs and lows since 5/8).  The center line still possible resistance near 1.1055.