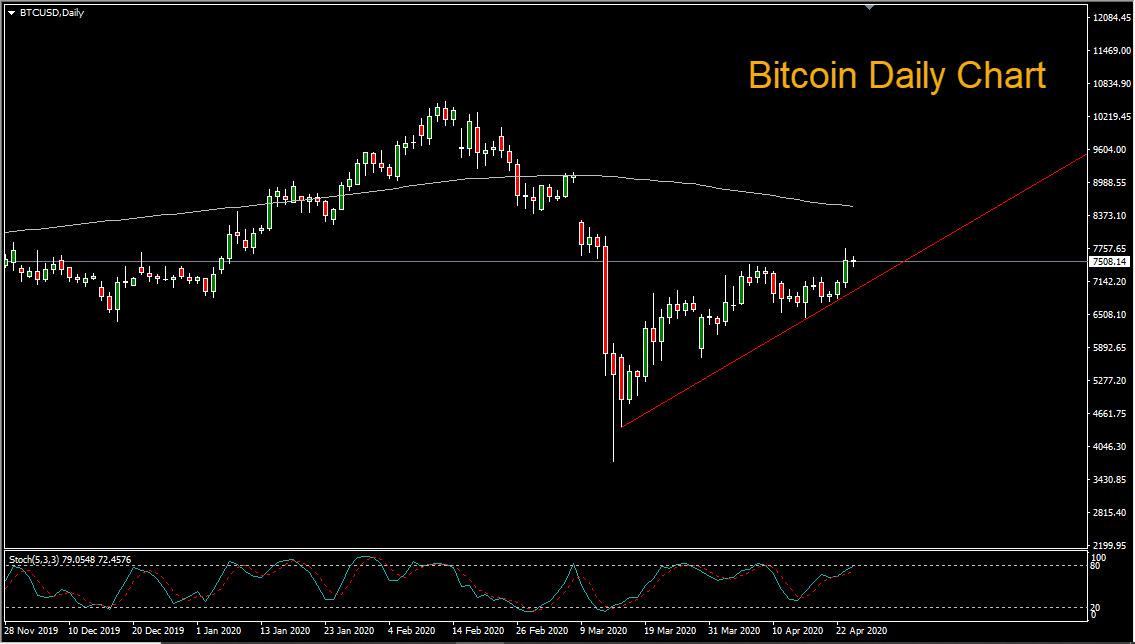 A surge in Bitcoin on Thursday to over $7,750 marked the latest leg of an uptrend that began in mid-March. Traders viewed Friday’s expiry for CME April Bitcoin futures as a catalyst for Thursday’s thrust higher. The CME Bitcoin futures contract expires every fourth Friday of a given month.

The world’s largest cryptocurrency by market cap sold off along with stocks earlier in March as fears over the coronavirus pandemic grew, but bounced back as equity markets stabilized. Risk sensitive currencies such as the Australian dollar and New Zealand dollar have also gained ground in recent weeks.

The next Bitcoin halving is set to take place on May 12. This event cuts the rate at which new Bitcoins are created, with miners receiving 50% fewer BTC for verifying transactions. Bitcoin’s supply is capped at 21 million coins and there are roughly 18.3 million in circulation at the time of this writing. The last halving in 2016 led to major increases in Bitcoin’s price, raising hopes of further gains this May. However, skeptics contend that the halving is already priced in. The contraction in supply of Bitcoin stands in contrast to the loose monetary policy of the Federal Reserve and central banks around the globe.

Data from Johns Hopkins University shows that coronavirus COVID-19 global cases have risen to 2,729,274 with 191,614 fatalities. WHO director-general Tedros Adhanom Ghebreyesus said on Wednesday that there are “worrying upward trends” in early epidemics in parts of Africa and Central and South America.  He warned: “Most countries are still in the early stages of their epidemics and some that were affected early in the pandemic are starting to see a resurgence in cases.”

Bitcoin traders now look to the key psychological level of $8,000. On the daily chart we can see a well defined upward trendline, representing support. The ‘line in the sand’ 200-period moving average looms overhead at $8,516.