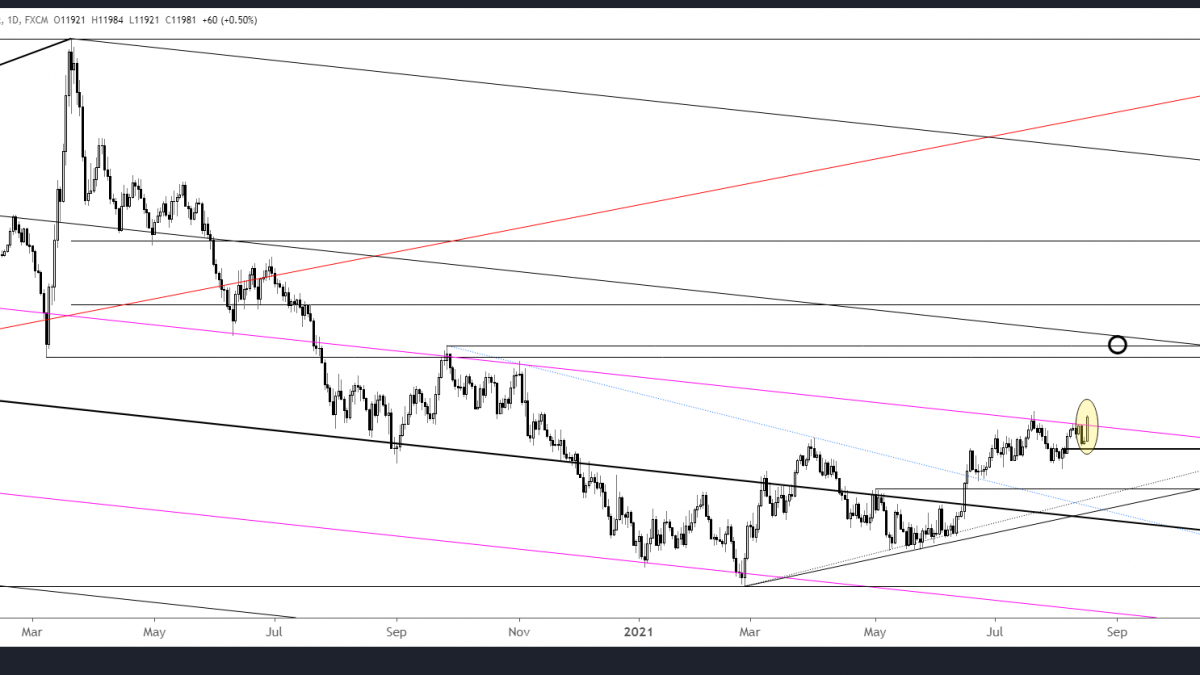 For the first time in quite a while, there is reason to discuss ES.  The channel from the May low is operable and price just turned down from the upper parallel.  As such, pay attention to the center line.  This line intersects the 7/14 high at 4384.50.  Watch the level for support BUT a drop below would indicate a behavior change and the underside of that line would then become proposed resistance.  There are times to act and times to observe.  This is a time to observe.

Simply beautiful.  Copper turned down from parallel resistance (25 line).  Remember,  the action on parallels within the downtrend channel strongly suggests that the broader trend is indeed lower.  Price is testing the median line so beware of median line gap risk (strong drop under the center line).  The next levels on the downside are the 75 line and lower parallels…both lines are just under horizontal levels of 4.088 and 3.942.

8/12 – Copper hit resistance and turned lower.  A tag of the upper parallel isn’t out of the question but the action on parallels within the downtrend channel strongly suggests that the broader trend is indeed lower.  That’s important information and I’m trading from the short side.  A drop under the median line would warn of downside acceleration with the next bounce level near the 75 line, which intersects the low at 4.088.

8/11 – Right on cue!  USDOLLAR reversed lower from parallel resistance (again) today.  I’m not sure how important the high is but short term focus is lower for now.  The first level to pay attention to will be 11900.

8/16 – EURUSD has traded into proposed resistance at 1.1800 but near term pattern is unclear.  In fact, another push higher would make the rally from the low in 5 waves and suggest that a more important low is in place.  If price does push slightly higher then watch for resistance near 1.1830.

AUDUSD finally broke down.  Is this move ‘for real’ or a ‘trap’.  It’s impossible to know at the moment.  I can make arguments for both.  The next critical downside level isn’t until .7000/50 but volume on futures was high today which warns of capitulation (see futures chart below with red and blue bars denoting high volume levels at at least 50 day highs/lows).  Bottom line, proposed resistance is .7290-.7315 and I’m bearish as long as that zone is respected.

8/10 – NZDUSD reversed just before .6960 but 5 waves down from the 8/4 high keeps the bearish view on track.  .7040 is the 61.8% retrace and daily reversal resistance…watch that for resistance now.  From an extremely short term point of view, .6990 or so may provide support for a small B wave.