The Different Types of Forex Brokers and Liquidity Providers 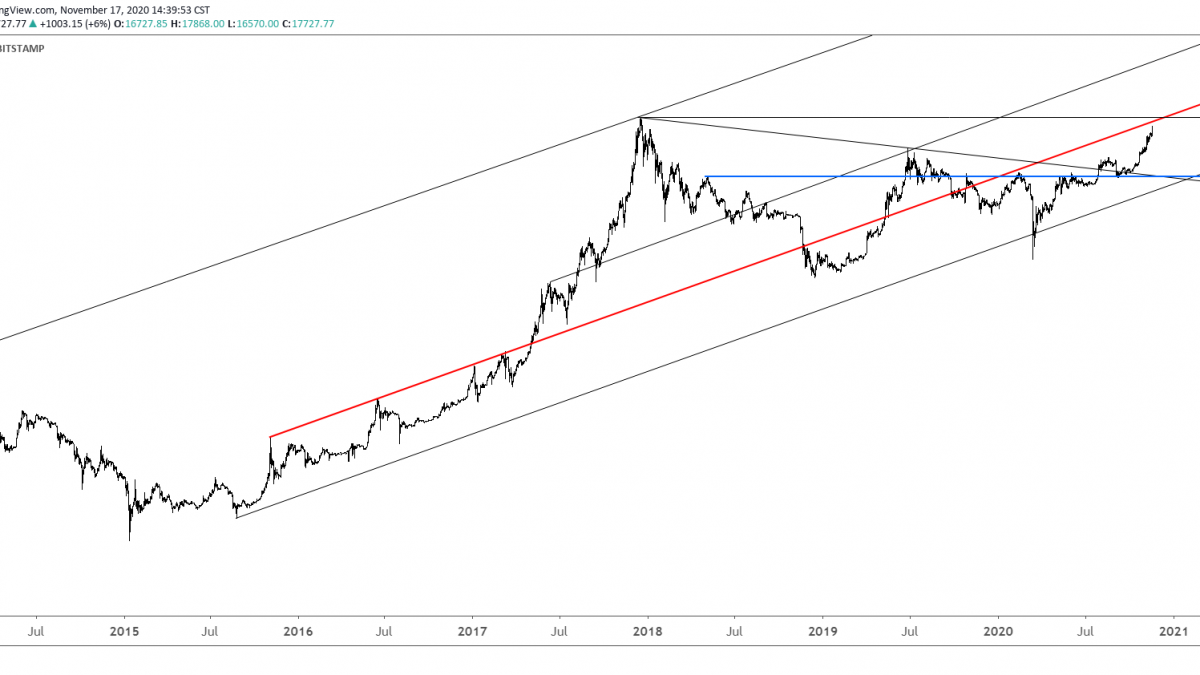 Bitcoin!  Heads up because ‘digital gold’ is quickly approaching its all time high of 19666.  Just under this level is a parallel that crosses major levels (mostly from 2015 to 2017).  BTCUSD is a long term bull but I’m of the mind that we see a strong reaction from the parallel/all time high.

Still tracking for that high low in USDCAD.  A proposed short term structure is shown in which a small b wave tops near 1.3125 before a flush lower in wave c completes the corrective decline bear 1.3020.  Maybe this happens on Canadian inflation data tomorrow.

11/15 – CAD futures made a 1 bar weekly volume reversal last week.  This the first bearish one (USDCAD bullish) since the November 2007 high (USDCAD low)!  The longer term signal supports the idea that weakness should be bought.  Proposed support remains 1.3025/50 (see below).

USDJPY is trading at the 61.8% retrace.  If there is anything bullish about USDJPY, then I’d expect a bounce here but now I’d also be aware of resistance at 104.80-105.00.  Confidence in upside is nil until a break above the trendline.  Interestingly, there are several bearish setups in Yen crosses that deserve mention.

11/16 – Like USDCHF, USDJPY is trading around proposed support.  Also like USDCHF, a clear breakout level has is defined.  That level is a nearly 5 month trendline near 105.30.  I favor buying a break above that level.  In the meantime, pay attention to 104.12 (61.8%) if reached for support.

CADJPY spiked through a parallel that relates to the trendline from the 2018 high last week before rolling over.  The decline is in 5 waves (see below), so respect bounce potential with resistance in the 80.34/56 zone before the next leg lower.

A possible head and shoulders top may be forming in AUDJPY since early June.  The pattern is forming under 5+ year trendline resistance as well.  The chart below shows a 200 week midpoint.  I’ve noticed that midpoints are often more precise in identifying pivots than moving averages.  Just one look clearly shows that the tool has been useful in recent years if operating in AUDJPY.  The 4 hour chart (2 charts down) shows that the recent rally failed after churning around the upper parallel of a bearish fork that originates at the June high.  The touches on the median line are ‘pip perfect’, which gives me confidence in this structure.  I like AUDJPY lower.