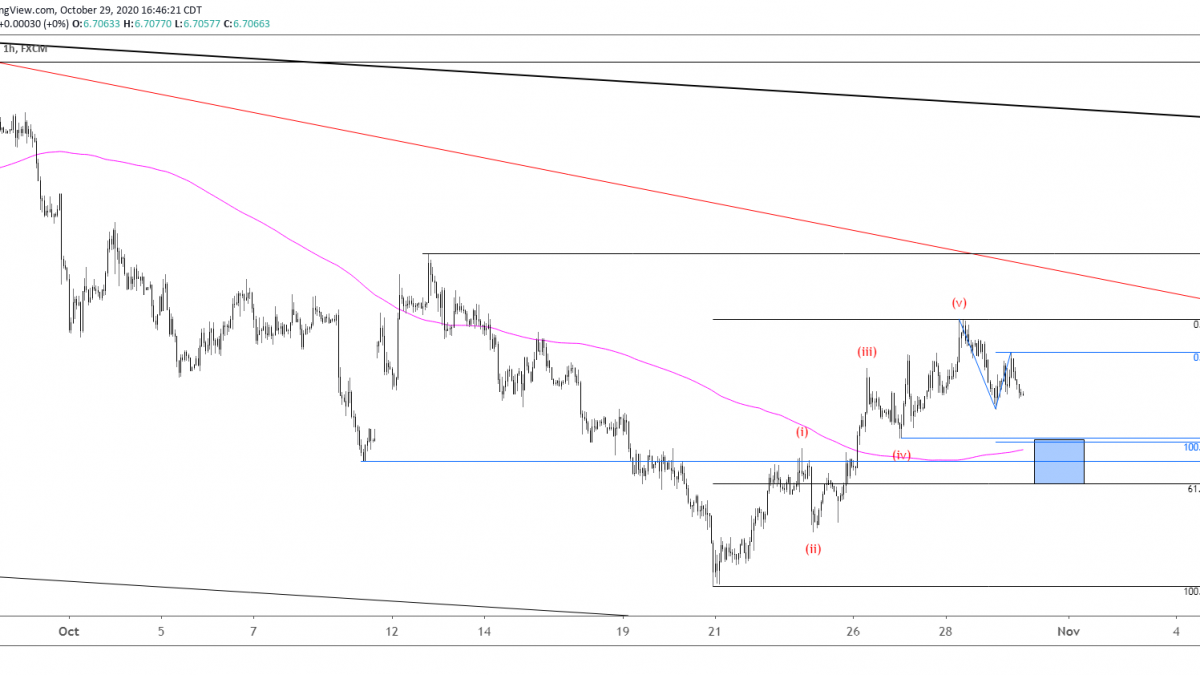 The USDCNH, DXY non-confirmation nailed the turn again.  Upside is favored for the USD over the next few weeks but there are reasons to suspect that the USD pulls back slightly (so maybe a bounce in equities too).  USDCNH pattern is one of those reasons.  The rally from the low is in 5 waves so expectations are for a 3 wave pullback.  That pullback is underway.  The proposed support zone is 6.6690-6.6880.

10/12 – USDCNH has held a massive level defined by resistance in October 2017 and support from February-April 2019.  Price has also turned up from the bottom of a steep bearish channel.  The top of the channel is about 6.81.  Strength above would be viewed as constructive.  Also, the chart below shows USDCNH (in red) and DXY (in black) over the last 3 years.  Every important turn was marked by non-confirmation between USDCNH and DXY.  A bullish non-confirmation is in place as long as DXY is above its September low.  Finally, DXY seasonal tendencies turn up now (5 year look back) and after this week (10, 20, and 30 year look backs).

EURUSD focus remains on 1.1480/95.  A bounce into the well-defined 1.1750 would present a high reward/risk bearish entry (allows for a tight stop).

USDJPY reversed higher today.  The low was right at the center line of the channel from the March high…what a beauty.  Near term focus is on low 105.00s.  I’ll reassess if that level is reached.  Watch for support near 104.35 (high volume level and 10/21 low).

10/27 – The USDJPY pattern over the last 3 months is also similar to the 3 months before the 2016 election.  USDJPY turned up in the days before the election in 2016 only to spike nearly 400 pips lower, reverse again, and then go straight up for the next 5 weeks.  A washout spike and eventual uptrend makes sense to me this time around too.  Asset managers are the longest Yen in at least a decade while dealers are the shortest since 2012 (see COT report below and understand that futures are quoted JPY/USD).  Extreme positioning is often present at major turns.  Ironically, USDJPY is trading at the same level as it was before the 2016 election.  Another ‘flush’ to rid the market of weak USDJPY longs before a massive reversal?  Pay attention to 101ish (see weekly chart below), which has been massive since 1993 (you know the BoJ is sitting there).

AUDUSD is playing out perfectly.  Low today is right at the center line of the short term channel.  Resistance remains the 25 line (thick red line) in the .7080s.  If price fails to bounce and breaks below the center line, then I’d favor going with weakness (median line acceleration).

No change to NZDUSD either.  In fact, I’m more confident in downside against this week’s high given the 5 wave drop from the high.  A 61.8% retrace of that drop would be .6675, which is exactly where resistance was proposed anyway.

10/28 – The short term fork in NZDUSD is a beauty.  The upper parallel nailed resistance the last 2 days along with the year open at .6724.  Resistance should be .6670s now.  The last 3 months have taken the form of a complex head and shoulders pattern.  The neckline is about .6535, which is just above the median line from the bearish fork.  Consider that a possible bounce area.

USDCAD tagged the median line of the bullish fork from the 9/1 low, which confirms that structure as ‘operable’.  Proposed support remains 1.3260, which now includes the top side of the 25 line.  An upside target is the upper parallel from that fork, which is about 1.3650.

10/28 – USDCAD broke above the trendline that originates at the 4/21 high.  This line crosses highs in April, May, and September so the break above is important.  Support should be 1.3260 now.  I’m unsure of upside focus at this point but have been of the mind that price returns to the former 4th wave high 1.3715.