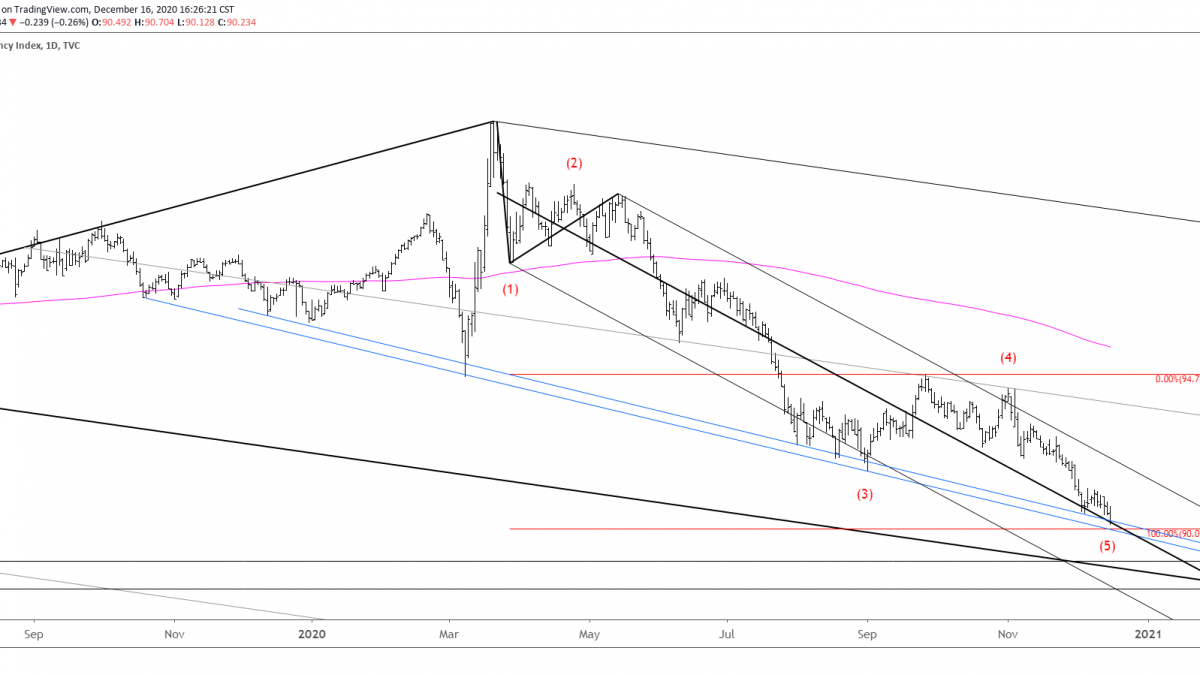 DXY nearly reached 90.02 today.  Low was 90.13 and price reversed until FOMC, after which the buck was no longer allowed to rally.  I maintain that reversal risk is high from this level (90.02).  Note also the blue lines that connect lows since October 2019.

12/3 – The USD destruction continues.  Wave 5 within the 5 wave cycle from the March high would equal wave 1 at 90.02.  If that doesn’t hold then 89ish is in focus and a major level to watch for support.

No change to NZDUSD analysis and levels.  The 50% retrace of the decline from the 2014 high at .7152 remains in focus for possible resistance and a drop under .7000 is needed in order to suggest that a reversal is underway.

12/7 – Kiwi bounced from just above .7000 again today, reinforcing the big figure as an important level.  As stated previously, a drop under .7000 is required to short.  If that happens, then .6750-.6800 will be initial downside focus.  It’s worth noting that AUDUSD made a slight new high today while NZDUSD did not.  NZDUSD had been leading the rally in recent weeks and may be leading the way lower now.

USDCAD has bounced from the line noted yesterday.  Strength above 1.2800 would warrant a short term constructive view with focus on 1.2950.

12/15 – USDCAD has been testing the line that extends off of the October and 11/9 lows for the last 4 days.  Price could bounce from here or from the line off of the June and September lows near 1.2590.  Irrespective or where a bounce materializes, 1.2950 is now proposed resistance.  This is the January low and the underside of a parallel that has proved critical for years (see zoomed out chart below).