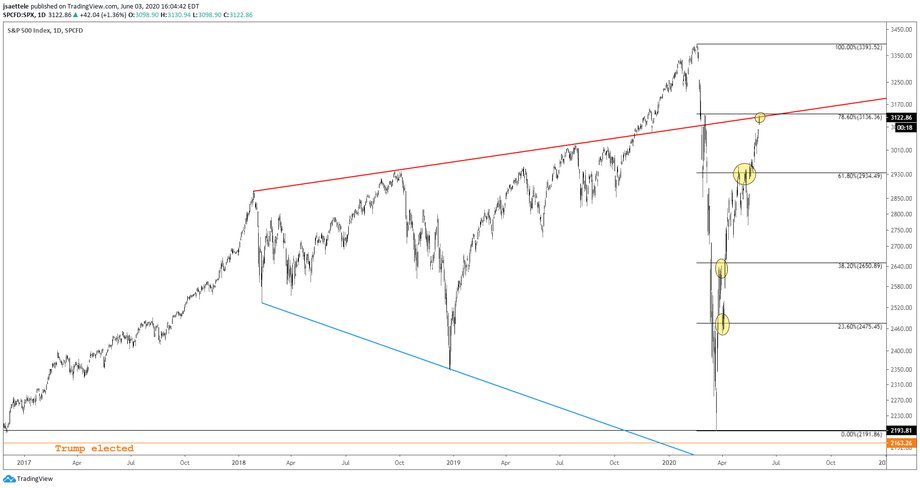 5/28 – Be aware of 3136 in SPX as a possible pivot.  The level is defined by the 78.6% retrace of the decline,March high, and the line that crosses highs in 2018 and 2019.  This line was support in December.  Price has responded to Fibonacci retracements (23.6%, 38.2%, and 61.8%) during the advance which increases confidence that ‘something’ happens at the next Fibonacci retracement.

TLT has quietly been breaking down.  Pay attention to 154 if reached for support.  This is the top side of the upper parallel of the channel from the 2007 low.  This line was resistance for years before the blowout move earlier this year.  If TLT is going to head for another run, then 154 probably needs hold.

Be nimble.  I was talking bullish in yesterday’s note on gold but price is just above the lower triangle line after today’s drop.  Don’t forget that all of this consolidation has occurred below long term resistance (magenta line).  A break below the lower triangle line would leave a consolidation top in place with a measured target of 1543.60.  I’d also pay attention to 1566.20.

/2 – Gold is in its 8th week of sideways trade but that may be about to end.  The drop from yesterday’s high is the 5th leg within the triangle consolidation.  A level to note for support is 1704.40, which is 61.8% of the alternating leg.  My ‘bias’ is that gold finds support there and then breaks out to the topside.  Be nimble (always) though because a drop beneath 1684 would indicate that the sideways trade is a consolidation top.

Spot gold is testing the neckline from a head and shoulders top.  A break below would set an objective at 1605.27, which is in line with the January high.  The September high at 1557 is also a level to know.

Copper rallied from support but could turn lower from the current level, which is a line that crosses recent highs.  Copper actually diverged from the rest of the ‘risk trade’ today with a down day.  If there is another push then the underside of the 2008-2016 line is a huge level to pay attention to near 2.53.

5/27 – Copper traded into proposed support today (low was 2.3585!).  As long as today’s low holds, respect upside in copper.  I’m watching this closely because a break lower would be a strong sign that AUDUSD is in for a deeper drop too.

AUDUSD continues to trade around resistance.  Although subtle, note the non-confirmation today between AUDUSD and NZDUSD.  AUDUSD did not make a new high during th US session but NZDUSD did.  There was also a high volume level today at .6933.  I’ll use that as a point of reference to trade from the short side.  Near term support remains .6750s.

6/2 – AUDUSD is pressing the top of the proposed zone for resistance (.6900).  The level is defined by a parallel within the channel from the 2011 high and the September 2015 low.  The next chart shows a Schiff fork (magenta structure) from the March low.  Price is testing the upper parallel.  A short trigger for me would be either a volume reversal (at least 4 hour) and/or a thrust through the upper parallel of the Schiff fork followed by a reversal back below.  If price does reverse lower, then .6750 is the first level I’d pay attention to for support.

NZDUSD is ticks under the 3/9 spike high.  The 78.6% retrace and upper parallel of the channel from the March low is also just above at .6480.  Pay attention to that level if reached.  Of course, a pullback first and then a rally to the upper parallel is also possible.  If that happens, then watch the median line for support near .6290.

6/1 – NZDUSD has broken above the cente line of the channel from the March low.  That top side of this line should now provide support near .6245.  Confidence in the median line as support is high given that the line was resistance the four previous days and on 5/20.  The 200 day average is just above at .6311 but the next important level on the upside in my view is the 75 line, which interesects the 3/11 high at .6344.

The crude rally from the 4/28 low counts in 5 waves.  The USO chart (see below) is actually cleaner in my view.  The implication is for a corrective pullback.  22.50 is ideal support in USO.  This is VWAP off of the low and the 4/21 high volume day (highest volume day ever).  In futures, pay attention to the 2016 low at 26.05 for support.

AUDJPY is testing the line off of the 2018 highs.  Daily RSI is above 79 as well.  Magenta dots indicate instances when RSI has been above 79 and signifies reversal risk.