We caught up with investing legend, global adventurer and author Jim Rogers to learn about his outlook on today’s markets.

Thank you for joining us Jim, it’s an honor to speak with you. What is your view on US equity markets, which recently made record highs despite the economic woes caused by the COVID‑19 pandemic?

A few stocks have made all time highs in the US, but most stocks are not actually up so much. A handful have, you know the names as well as I do. But yes, the US market averages are making all time highs. I usually don’t choose to get involved in a place making all time highs. There are certainly some American companies and stocks which have not been participating and there may well be bargains there. But to buy the averages, in my view, would not be a smart thing to do. There’s an election coming in November and the people in Washington will do anything they can to get elected, so it may be a good time for another few weeks.

Can government spending and money printing continue to buoy markets?

Government spending and money printing can continue and will continue, yes. And it is going into stock markets, not just in the US, but in many countries around the world. So, yes, it probably will. I worry about the consequences. If you’re in America, being an old American is not good, but being a young American you don’t have much of a future, because the US was already the largest debtor nation in the history of the world and over the last six months the debt has skyrocketed by a staggering amount. So the legacy a 15 year-old or a 30 year-old is being left is not going to be good. But that is true of Japan and other countries too. I shouldn’t just pick on the US . The Japanese are doing the same thing, only maybe worse.

After becoming the largest debtor nation in the history of the world the US has since added trillions of dollars of debt. What do you think the endgame will be?

The UK was once the richest and most powerful country. In the 1920’s they started spending a lot of money, borrowing a lot of money and I think you know the rest of the story. The UK went from being the most powerful nation to, not an also-ran, it’s still there, but it’s nothing like it was 100 years ago. And it continues to decline on a relative basis and probably even an absolute basis. So I know the endgame. It’s not the first time in history that countries have done things like this. So, teach your children Mandarin.

You’ve been a buyer of gold since the summer of 2019 and it has recently made record highs. Silver is cheaper on a historic basis than gold, would you rather buy silver than gold here?

Absolutely. I will buy both when there are opportunities. But, I hope I’m smart enough to buy more silver than gold.

Commodities are the cheapest among major asset classes. Are there other commodities you are interested in buying, such as sugar for example?

As an investor, you like to look at things that are ignored, hated and cheap – but have signs of positive changes. Travel, transportation, tourism are certainly doing badly now. Are you keeping an eye on these for any glimmers of hope?

Money printing debases the US dollar, yet it remains a safe haven in times of turmoil. What is your outlook for the greenback?

Well, yes, you’re exactly right. It’s staggering the amount of money the US has printed and borrowed and spent. But so has everybody else. As I said, look at Japan. Even China is printing and spending money. Nothing like in the US or in Japan but they are doing it too. So relative to everything else the US is suffering at the moment, because they are spending so much and they have the various things going on such as the election. But I would suspect, before this is over, when the turmoil gets bad again, next year or whenever, the US dollar will rally, it will get overpriced, it might even turn into a bubble depending on how bad the turmoil is – because I don’t see that there’s an alternative or much of an alternative. I’m looking for an alternative all the time of course. If the Chinese Renminbi were convertible it might be a viable alternative. But it’s not convertible, so that’s not even a viable idea at the moment. Any currency that I look at, I see problems.

Well, the US became the most successful country in the 20th century, but along the way we had many depressions, no human rights, massacres in the streets, a horrible civil war. America had many problems along the way. China is having and will have many problems. Problems didn’t prevent America from becoming very successful. I don’t see anybody else, I don’t think it’s going to be Spain or Sweden or other countries around the world. I’m still optimistic, but I want to repeat – there will be many problems in China. You’re going to see bankruptcies in China, Beijing has said they’re going to let people go bankrupt. I hope they mean it. They think they mean it, but for decades China hasn’t had a situation where a lot of people are going bankrupt, so these guys don’t know, they haven’t experienced the trauma of companies crumbling around the country, so I don’t know what’s going to happen. But I hope they mean it when they say they’re going to let people go bankrupt. You’re going to see problems in many places. China already has become an astonishing country in the 21st century. In the year 2000 most people couldn’t find China on a map.

You have suggested that if you want to succeed, it’s a good idea to put all of your eggs in one basket. Can you explain why you think it’s better not to focus on diversification?

Well, the guys that make a lot of money, make it by focusing – look at Bill Gates, he focused enormously. Henry Ford. These guys put all their effort and capital into one place. And you have to be right. There are lots of car companies you and I never heard of, because people put their eggs in one basket and it failed. So you have to have the right basket and you better watch the basket very carefully. Diversification is unlikely to make you rich. If you want to be rich, focusing and concentration is the way to do it.

What are your views on the potential of investing in North Korea?

Well, first of all, it’s illegal for me to invest in North Korea, because I am a citizen of the land of the free. But for people who can invest in North Korea, there are great opportunities, especially once the 38th parallel comes down, the Korean peninsula is going to be an extremely exciting place to be. Because they have cheap, disciplined, educated labor with lots of natural resources in the north. The south has capital and manufacturing ability. The south has a shortage of females and the north will help alleviate some of those problems. North Korea spends staggering amounts of money on defense, South Korea spends staggering amounts of money on defense. Huge amounts of money will be saved once the 38th parallel comes down, so it will be a very exciting place to be, right there on the Chinese border. Japan is against it, because Japan knows it cannot compete with an open Korea. The American army is against it, because it’s the only place it can keep troops on the Chinese and Russian borders.

Can you share some advice for young people today, in light of the fact that they may well face challenging economic times ahead?

The only way to be successful and happy is to figure out what you love the most and pursue it. Don’t listen to me, don’t listen to your parents or your teachers or your friends. Figure out what you love the most and do it. Jack Ma was a school teacher and he went into his apartment and started playing with this thing called the internet, because he was fascinated by it and loved it. And then you probably know the story of Alibaba or Bill Gates or plenty of other people who did nutty things, things that were considered nutty at the time, but they loved it, they didn’t care. So if you want to be successful, do what you love and you’ll probably be successful. And even if you’re not successful, you don’t care, you’re happy.

Can you tell us about a favorite moment from your around the world trip?

In the Sahara desert, I remember one night Paige and I were out there and somebody had given us a special bottle of sherry. When the Spanish were sailing around the world, they took Spanish sherry. An old Spanish sherry company gave us two bottles – one to take and one to put in their museum when we got back. And there we were in the Sahara desert, we started drinking one of them. I don’t know if you’ve ever been to the Sahara, it’s unbelievably romantic. There’s no moisture, there’s no pollution in the air, you’ve never seen skies like that. Everywhere you go there’s some kind of reflected noise somewhere, but in the Sahara it’s perfectly quiet. And I remember we felt something on our faces and we realized that it was the breeze blowing. In the Sahara it’s unbelievably romantic and silent with the moon and the stars and we were drinking this special sherry from the Spanish, it was a great evening. The next morning when we woke up in our tent, we looked out and there were 100 camels because overnight some nomads had come by, stopped and pitched camp, brought all their camels – and they came running over to see our tent. Our tent was embarrassing, they had these big tents that they lived in, it was quite an extraordinary event.

Thank you very much for participating in this interview Jim, we hope you’ll visit us in Stockholm one day. 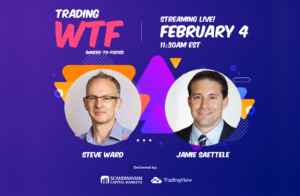