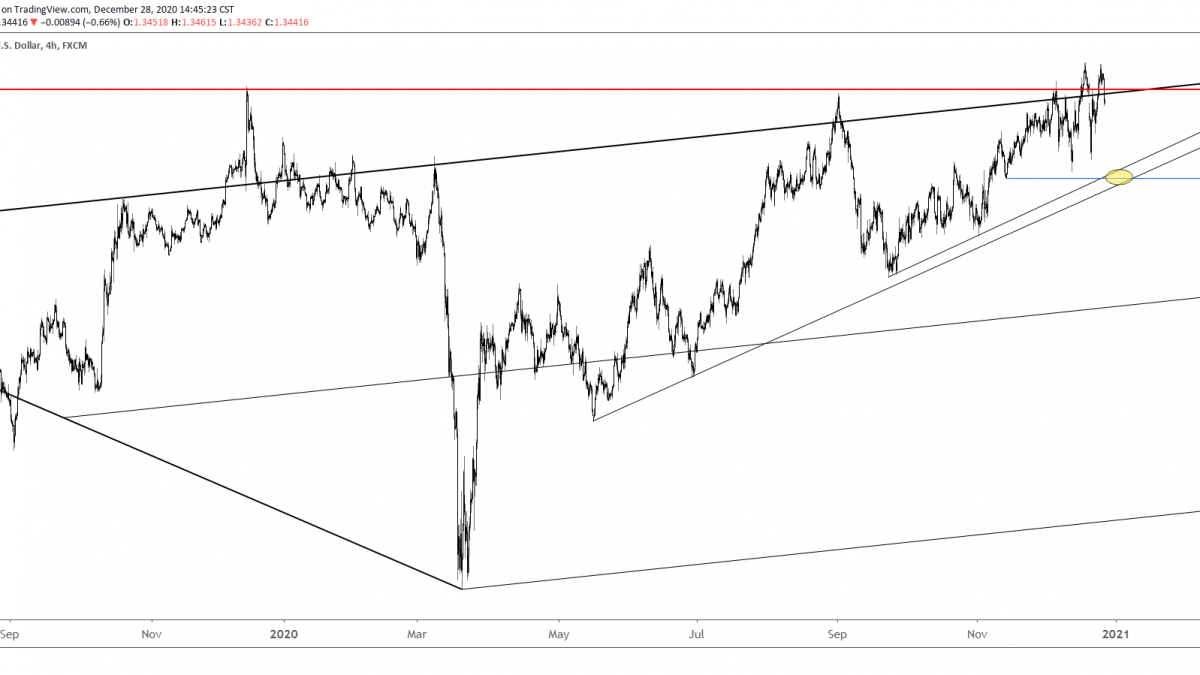 GBPUSD continues to oscillate around the critical 1.3500.  A gap higher on perceived positive Brexit news was followed by weakness throughout the day…a classic ‘sell the news’ dynamic.  1.3500/25 remains proposed resistance.  The top of this zone is a high volume level.  Near term focus remains towards 1.3100ish.  The level is defined by trendlines and is just under the 12/11 low.

12/22 – Yes, we know that 1.3500 is massive for GBPUSD but price is also failing at the median line from the fork that originates at the Brexit low.  When this happened in August, Cable pulled back 7 big figures.  Near term focus is on 1.3100ish but this is a great spot for another big pullback.  The battle lines are at least drawn.

After taking out the November low, USDJPY has turned up.  The low was also on the center line of the channel from the March high.  Watch for support from the well-defined 103.70.  Near term upside focus is on channel resistance and the December high at 104.76.  If that level gives way, then an aggressive bullish stance will be warranted.  It’s also a positive (for USDJPY) that VWAP from the December high in Yen futures (USDJPY low) has acted as resistance over the last week (see futures chart below).

USDCAD is stuck between a rock and a hard place.  1.2792 remains ‘ideal’ for support and I continue to favor a higher low near that level.  However, the mentioned 1.2950 was precise resistance.  The longer term chart below accentuates the importance of this level, which is defined by a parallel that has been major support and resistance for 7 years.  Bottom line, watch for support at 1.2792 but anything bullish on a swing basis is delayed until/unless price takes out 1.2950.

12/21 – USDCAD nailed the mentioned 1.2950 and turned on a dime.  1.2792 remains proposed support, especially because the 61.8% of the rally is now the same level.  I’m inclined to expect a hold at that level since it’s reinforced by the top side of the wedge line from the October high.

A downtrend is underway in USDTRY so we want to be sellers of strength.  Price could bounce from the center line of the newly formed bearish channel, which is now.  If a bounce materializes, then proposed resistance is now 7.76.  The next important downside level of interest is the lower channel line and 2 legs from the high at 6.9765.

12/27 – USDTRY has definitively broken the March-August trendline.  This line was support in November following the plunge from the top.  The implication is that the path of least resistance is lower.  The underside of the broken trendline is now proposed resistance near 7.78.